I attended the first British Halal Food Festival in Birmingham yesterday and it did not disappoint! I’ve been to the London one a couple of times so was super excited that there was going to be one in my home city and didn’t want to miss out.

Whether you’re a foodie or not, it was a lovely family day out and plenty of halal food choices to choose from.

The actual venue (Digbeth Arena) is quite large and all the stalls were outdoors. There was a tent set up with some tables and chairs where people could eat or take shelter when it was raining for a short while in the morning! The sun did come out though and it was a beautiful day for the rest of the day.

The atmosphere was fantastic – it was busy and buzzing, which meant that some of the queues for the food stalls were quite long! But we found the food we had queued up for was all worth the wait.

There were plenty of food cuisine to choose from – Indian, Greek, Jamaican, Japanese, Portuguese, Mexican to name a few. I was expecting more sweet/dessert stalls but the ones that were there had amazing food. The churros were by far the best ones I’ve had! And I’ve eaten plenty in my time 🙈 my other favourite food there were the chips. They were so nice (obviously I wasn’t counting any calories or watching what I was eating).

There was also a henna stall by a super talented henna artist, a mocktail stall, pick & mix sweets stall and some other non food stalls too.

One criticism that I have is that the event stage in my opinion wasn’t in the right place. It was situated near popular food stalls so there was a lot of people queuing up nearby and lots of noise making it difficult to hear and even see what was going on on the stage. The benches for people to sit on were not stable, one collapsed on the floor with a pregnant lady sat on it! She was fine though, but had the stage been in an area a little away from food stalls, it would have been better.

Apart from that, it was all good! Prices were not as extortionate as we were expecting, they were set out at a reasonable level.

Overall it was a great experience that could have been enhanced with maybe some live music. However, I would still recommend visiting the next one in Birmingham.

P.S. Apologies for the quality of the photos, we were too busy enjoying the food to take better photos! Just wanted to still give you an idea of what the food looked like though. 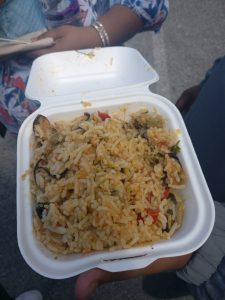 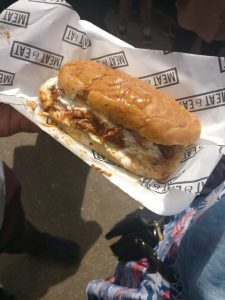 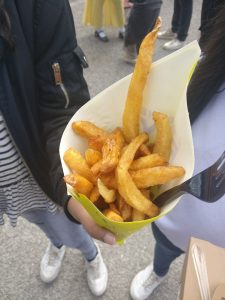 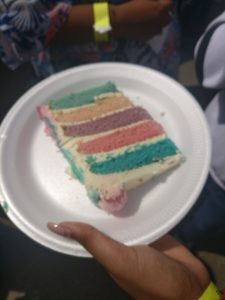